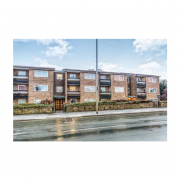 There is a small Ground Rent increase in 2034.

Nine of the Leases have been extended and Nine remain as originally granted.

SIX with FIFTY-THREE years TO RUN.

TWO with FIFTY-TWO years TO RUN.

ONE with FIFTY-ONE years TO RUN.

With Eighteen Under Leases from the ManCo to each Apartment with Garage.

The ManCo Covenants to Insure through the Agency of the Landlord.

Section V Notices are not required.